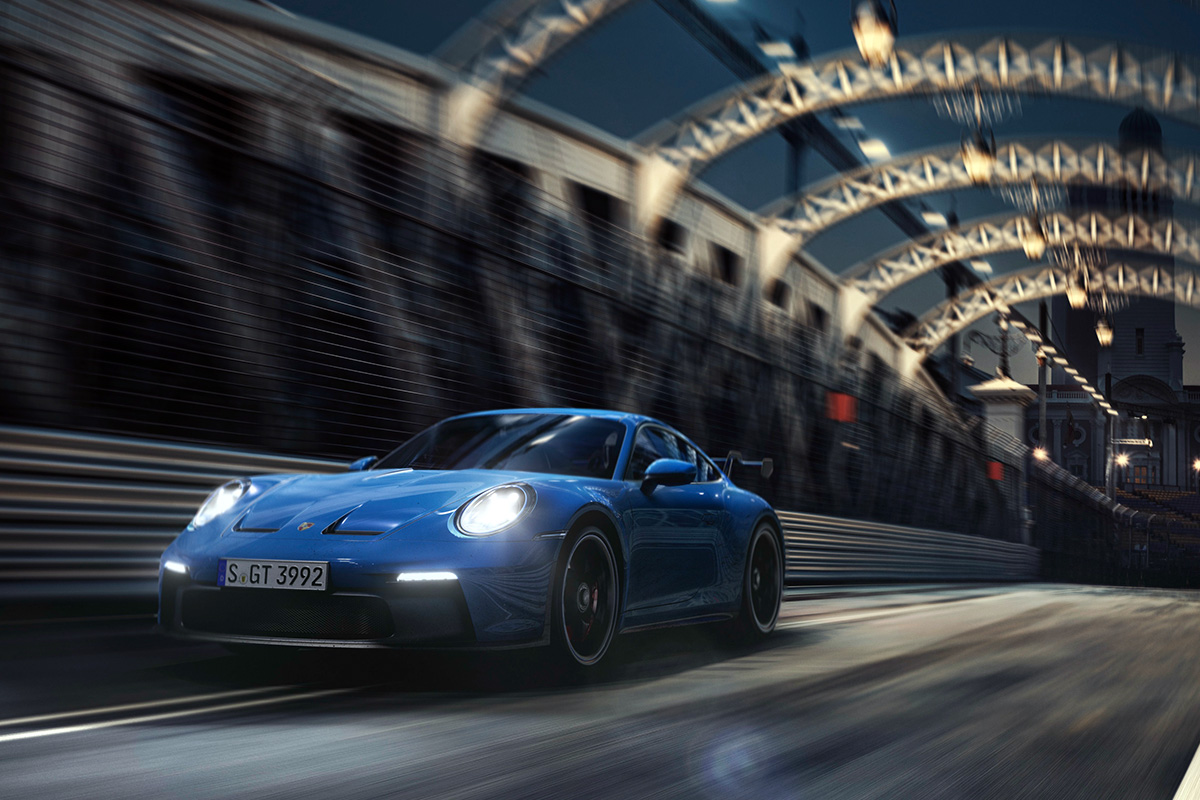 Over the years, Porsche has introduced a number of 911 variants, starting with the Turbo model and later expanding far and wide, with specific models to fit every need. If you’re new to the Porsche world, it’s easy to get confused between the Turbo, GT3, GT3 RS, GT2, GT2 RS, Sport Classic, Carerra GTS, R, and Speedster models.

For me, the Porsche 911 GT3 was the one that really clicked with me, a track-oriented model that is still suitable as a daily driver. While I love the crazy speed and acceleration that the 911 Turbo offers, I’d gladly give up some of that (do you really need to go 0-60 mph in 2.2 seconds?) for more handling prowess should I decide to do a track event, or even for just a Sunday in the twisties. Not to mention, it just looks freaking bad ass.

Porsche introduced the first 911 GT3 back in 1999 with the Porsche 996 model, starting a tradition of transferring what it learns on the race track directly to cars designed for the road. And they’ve continued to do so with ever iteration of the 911. As such, it was only a matter of time before the 2022 Porsche 911 GT3 made its timely appearance. 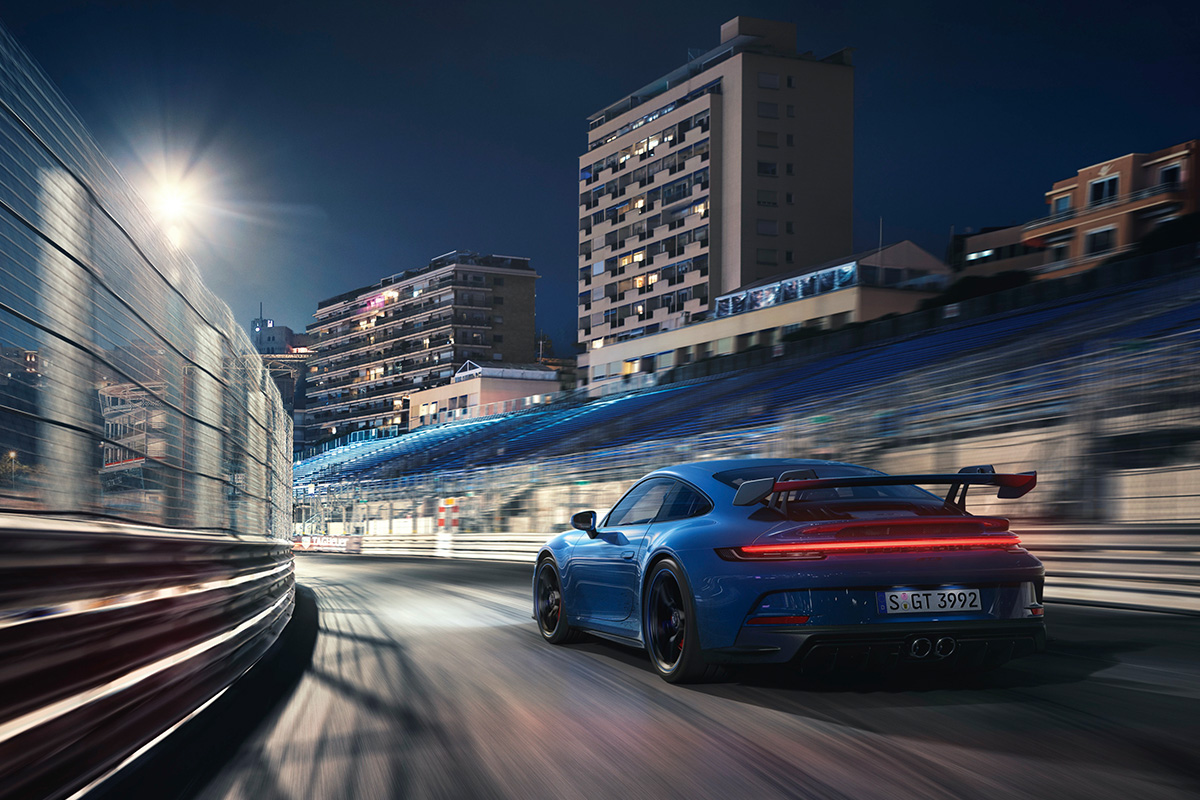 The new 2022 911 GT3 aims to raise the bar once again, making use of extensive lightweight materials, refined aerodynamics and a motorsports-derived double wishbone front axle layout. If that’s not enough, they also dropped a high-revving, naturally aspirated engine under the hood, this combination delivering performance like you wouldn’t believe.

“With a soul that’s born in the Motorsport, the new Porsche 911 GT3 sends a driver’s heart racing,” said Kjell Gruner, President and CEO of Porsche Cars North America, Inc. “Whether it’s a customer enjoying their favorite twisty backroad or taking to the track, the new 911 GT3 promises to be among the most exciting and rewarding cars we make.”

Oh, and did we mention that the 911 GT3 is available with a six-speed manual?? Porsche knows that many of their customers still want the ability to row their own gears and have a more engaging driving experience, especially in a track-oriented car like this one, so kudos to them for helping to keep manuals alive! 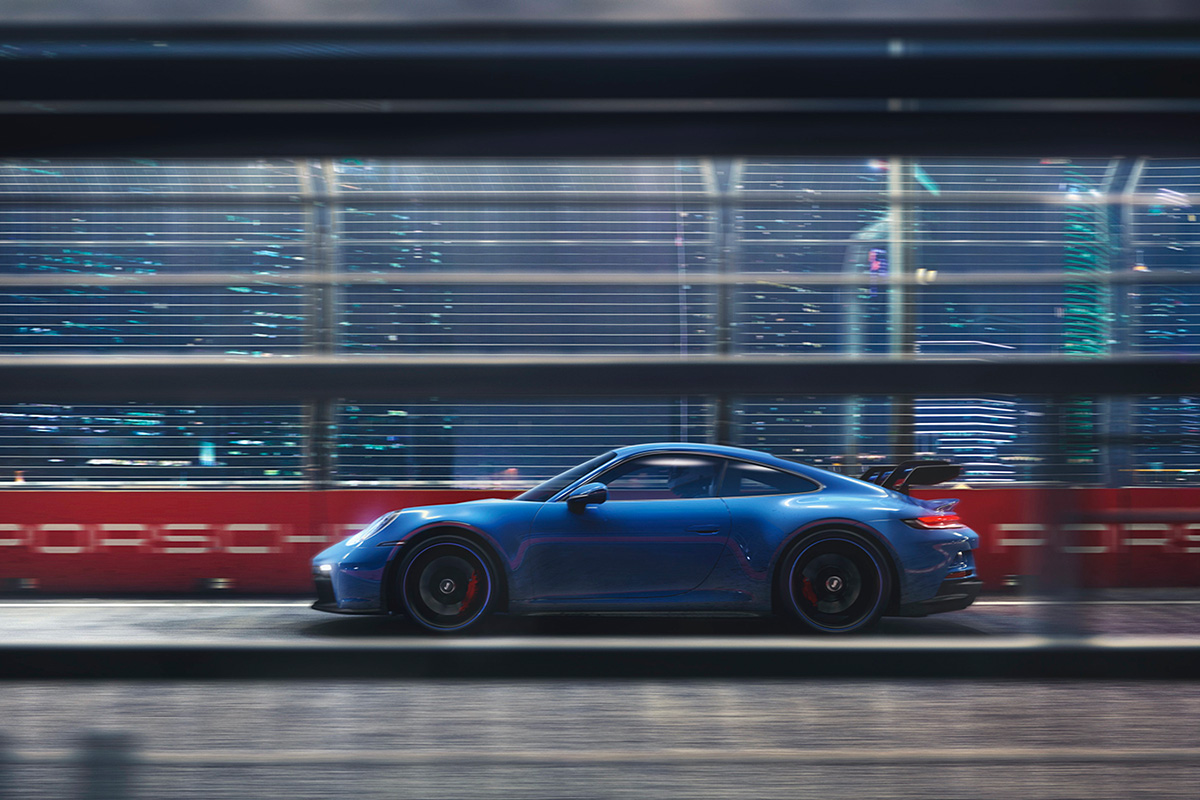 The Porsche 911 GT3 has the heart and soul of a racer, with a naturally aspirated 4.0L, six-cylinder boxer engine that revs to 9,000 rpm. Generating up to 502 hp and 346 lb-ft of torque, the engine offers extremely sharp throttle response thanks in large part to its six independent throttle bodies. This engine is virtually identical to the unit found in the new, track-only 911 GT3 Cup race car.

This engine, which was first introduced in the limited-production 2019 911 Speedster, has been further optimized for use in the new 911 GT3 with new pistons. A dry-sump lubrication system ensures a sufficient oil supply even at very high lateral and longitudinal loads by using a total of seven suction stages that quickly return oil to the external tank.

While a seven-speed PDK transmission (engineered and tuned specifically for the 911 GT3) is included as standard equipment, purists will likely gravitate to the available six-speed manual transmission option. Acceleration from 0 to 60 mph with the standard seven-speed PDK takes only 3.2 seconds and top track speed is 197 mph. 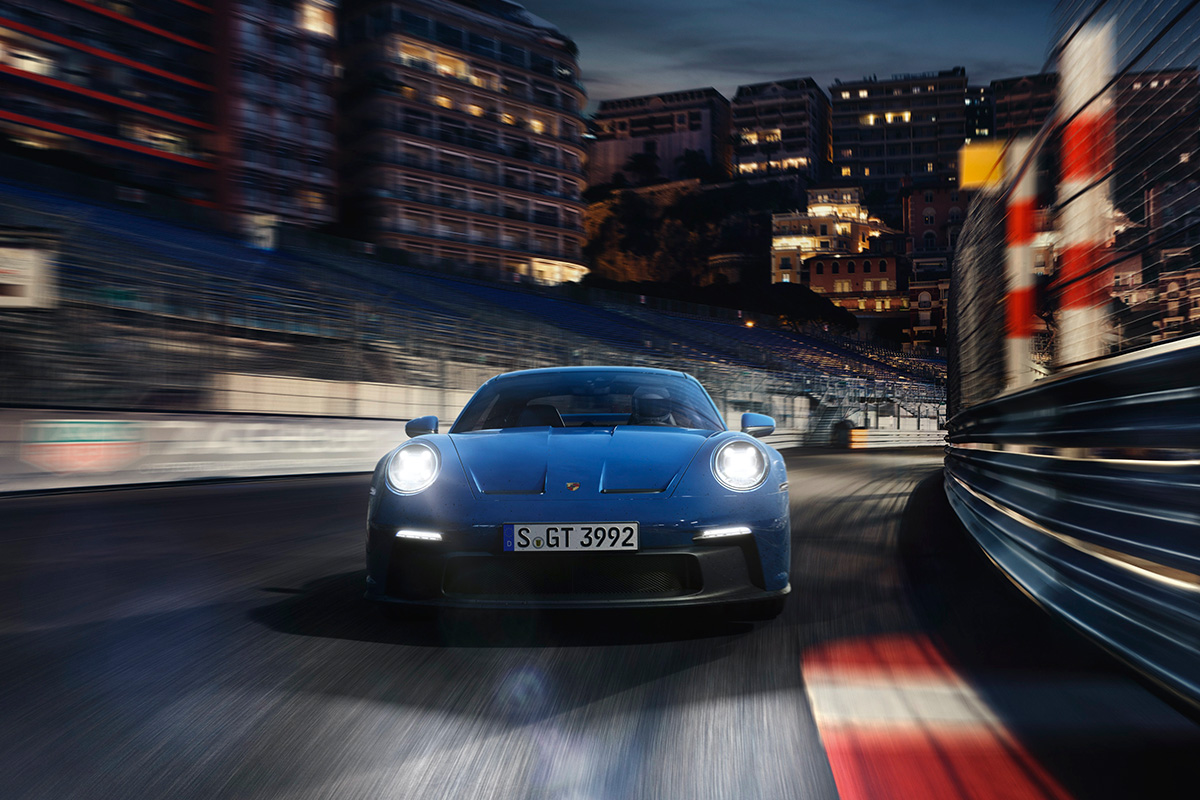 The free-revving engine is only a one part of what makes the new GT3 such a standout. Based on the 911 Carrera body, front track width increases by 1.9 inches. Despite the change in size, the new model weighs almost virtually the same as its predecessor. This is possible thanks in part to a more extensive application of lightweight materials in the body than ever before in a 911 GT3. The hood, rear wing, and fixed rear spoiler underneath the wing are all made of carbon fiber reinforced plastic. Lightweight, noise insulated glass on all of the windows also aids in accomplishing the ambitious weight target.

Narrowing the gap between race and road cars even further, the double wishbone front axle of the GT3 is derived from the 911 RSR and 911 GT3 Cup cars and adapted for road use, marking a major milestone in the history of the 911. This front axle offers even more direct and precise steering than the predecessor. Cornering stability improves, allowing for higher cornering speeds and better mid-corner control over uneven pavement.

As with past models, the rear axle uses a multilink design, but for this generation an even greater number of ball joints in both the front and rear are used, further enhancing the capability of the GT3 chassis. In fact, the new GT3 suspension does not share any parts with the current 911 Carrera models. 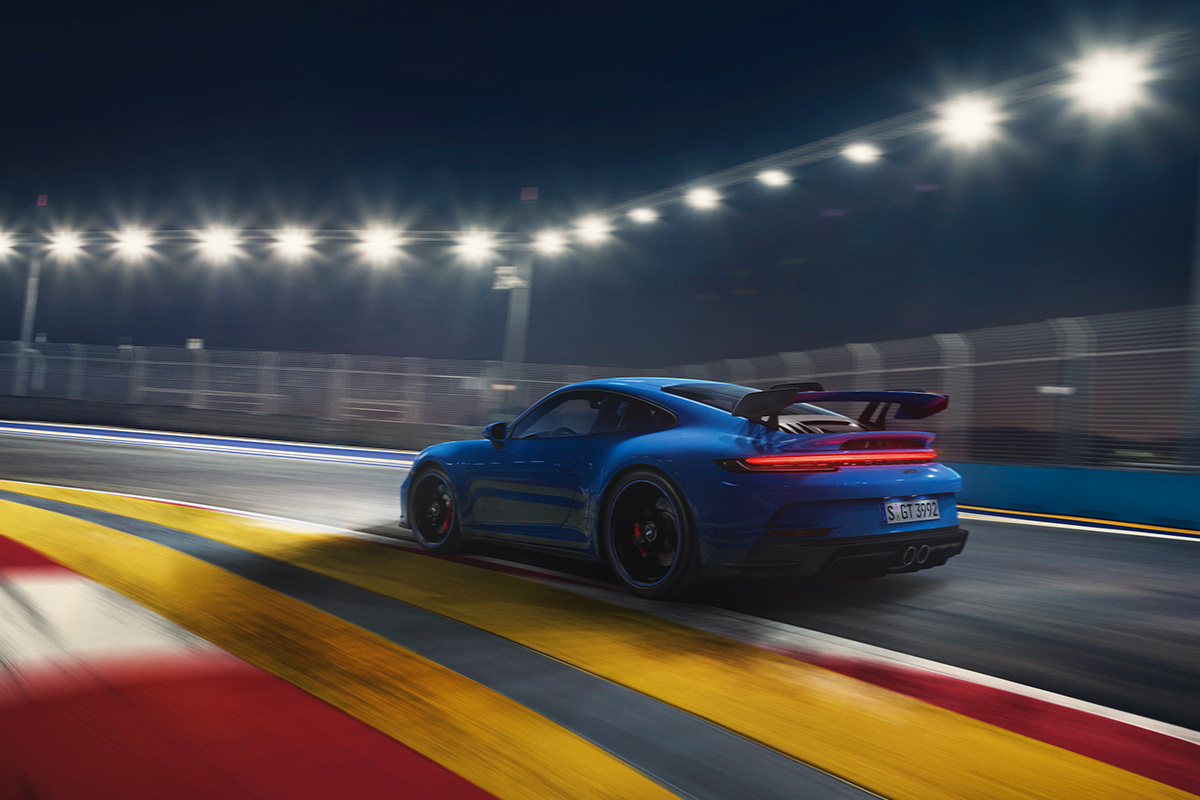 The standard braking system also boasts improvements over the predecessor model with cast iron discs measuring 408mm in diameter on the front axle. The GT3 discs are approximately 17% lighter than the 911 Turbo’s due to the use of a narrower friction ring. Porsche Ceramic Composite Brakes (PCCB) are also available as an additional cost option.

GT-specific forged alloy wheels with a 20″ diameter front / 21″ diameter rear contribute to the overall improvement in vehicle dynamics. The front wheels are half an inch wider than the wheels of the previous GT3, and gain an inch of diameter in the rear. Despite increased width, the new wheels are also ~3.5 lbs lighter in total as compared to the wheels on the last GT3. Customers may also specify pin striping on the wheel in either Shark Blue or Guards Red.

Complementing the new wheels are specifically developed ultra high performance summer tires that are 10mm wider at both the front and rear, now measuring 255/35ZR 20 on 9.5J x 20 front wheels and 315/30 ZR 21 on 12J x 21 wheels at the rear. For drivers who desire an even more track-focused setup, Porsche is offering a street legal track tire – previously reserved for RS models – for the first time. These tires were used to complete the benchmark laps set at the Nürburgring, which it did in 6:59.927 minutes. 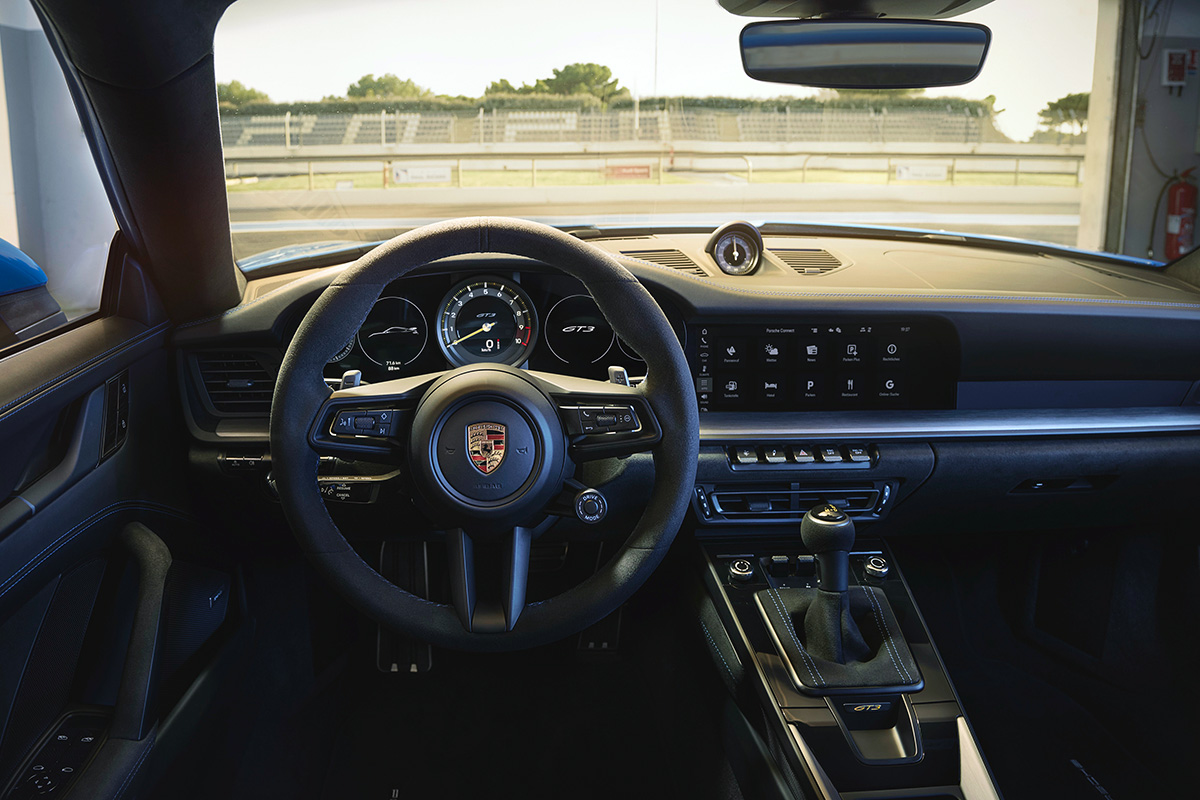 Aerodynamics also play a critical role in the improved performance capability of the new GT3. The new front fascia includes integrated cooling intakes as well as an adjustable front spoiler lip and an adjustable front diffuser that can be set up in stages for track use. Specific side skirts optimize airflow around the wheels, but the most striking aerodynamic development lies out back where swan-neck connections support the rear wing, and a large rear diffuser is visible.

As in the front, the rear wing is manually adjustable in stages ranging from settings intended for road use to positions intended for track use only. Even in the “normal” position, it delivers aerodynamic downforce up to 50% greater compared to the previous 911 GT3. And when the performance position, which is not intended for street use, is applied to both the front and rear, downforce increases by up to approximately 150%.

The connection to racing continues inside where a GT3 Multifunction Sport steering wheel with a 360 mm diameter and upholstery in Race-Tex is standard equipment. For the first time in a 911 GT3, the steering wheel also includes a drive mode switch, allowing the driver to switch between driver configurable settings by simply turning the dial. 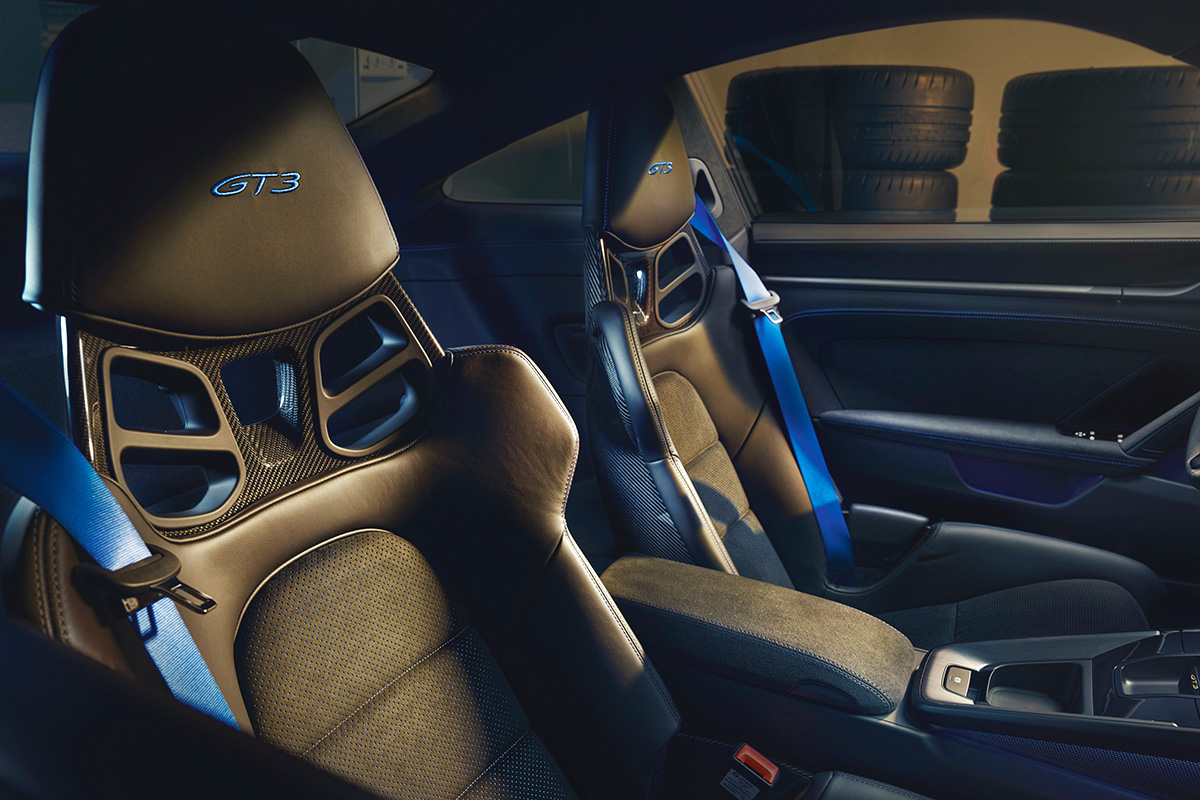 Four-way Sport Seats Plus come standard, while 18-way Sport Seats Plus and carbon fiber Full Bucket Seats, the latter of which save roughly 26 lbs., are available as extra cost options. While most of the interior is closely related to other 911 models, there’s one particular difference of note: the gear selection lever. Specifically designed for the GT3, the PDK gear selection lever is based on an adapted version of the manual gearshift lever. Unlocking it to change gears is possible by pressing on the shift pattern visible on the top. Additionally, this design allows for manual upshifts and downshifts without the use of the paddles.

There is also a GT-specific “Track Screen” function that reduces the amount of information in the screens surrounding the analog tachometer to the bare essentials and groups remaining information closely around the central dial so that remains easily visible. Tire pressure and water temperature are always visible on the left, and the display on the right is configurable.

The Chrono Package continues to be available as an option. This feature, which differs from the Sport Chrono Package found on many other Porsche models, adds an analog stopwatch on the dashboard and a digital stopwatch in the instrument cluster. This also adds Lap Trigger support. The Lap Trigger, which is available through Porsche Tequipment, allows for very precise measurement of lap times that can be analyzed and compared on a smartphone using the Porsche Track Precision app. 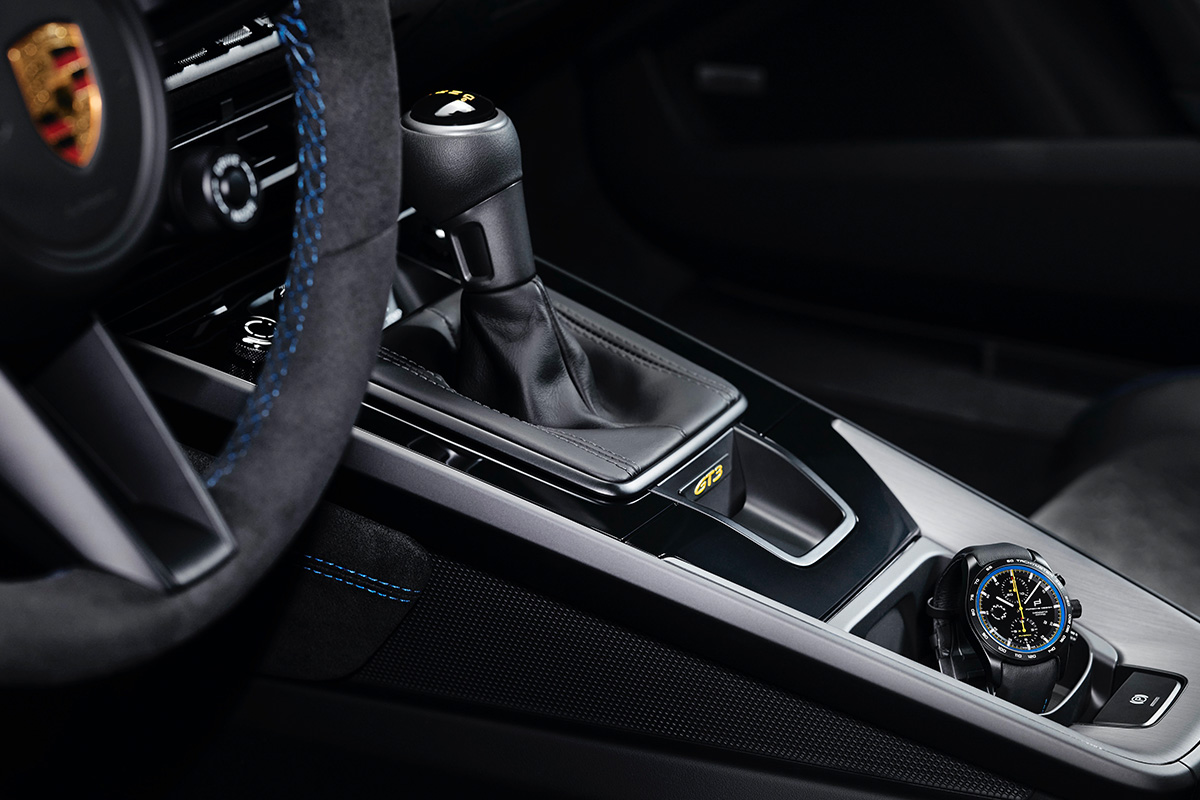 The new 2022 Porsche 911 GT3 is expected to arrive at dealerships across the US by Fall 2021. Pricing and order availability will be announced closer to the on-sale date. If we had to guess, I’d say the new GT3 will likely start in the $150,000-$175,000 range. We’ll let you know more once that information is released.