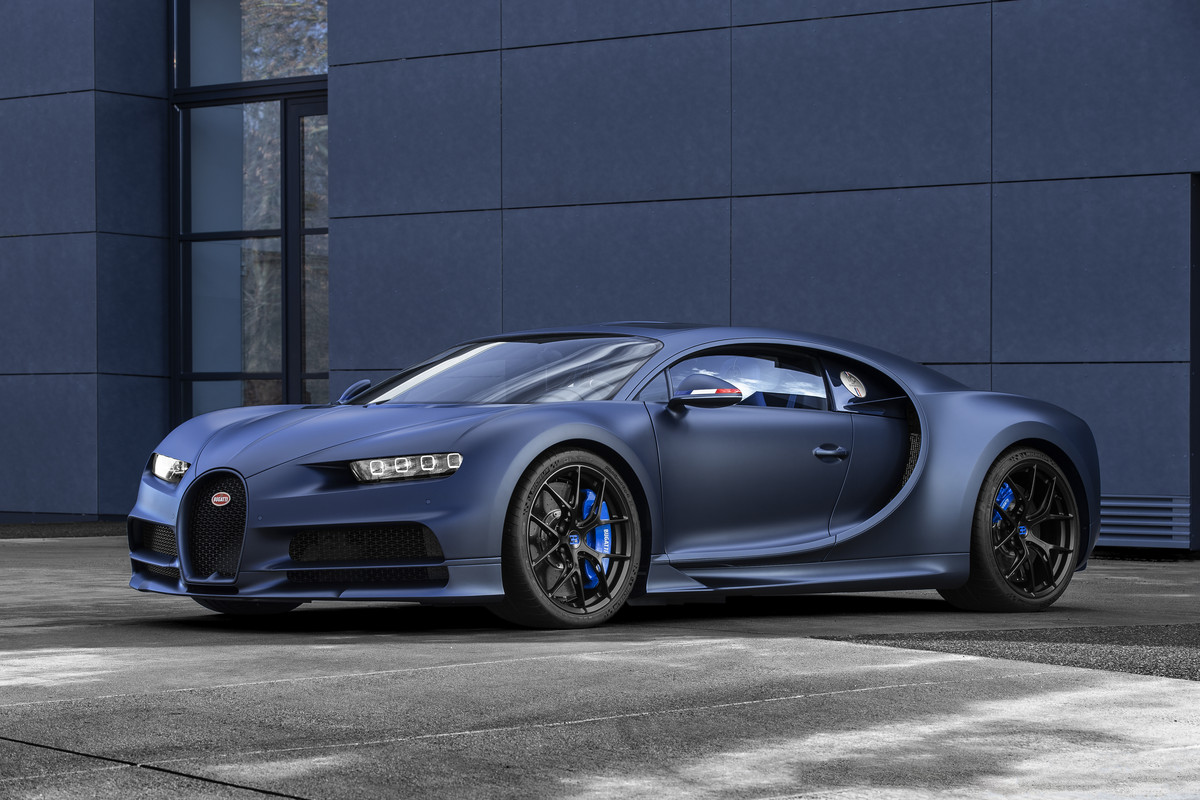 Feast your eyes on the Bugatti Chiron Sport “110 ans Bugatti”, a new special edition Chiron Sport that celebrates the 110th anniversary of the brand, with only 20 vehicles to be produced. This new edition is not only extremely exclusive but also pays tribute to France.

“With the limited Chiron Sport ‘110 ans Bugatti’, Bugatti is ushering in the 110th anniversary of its foundation. At the same time, we are underlining our origin and our French roots in Molsheim,” says Stephan Winkelmann, President of Bugatti Automobiles S.A.S. “Molsheim in the Alsace region of France is an essential element in Bugatti’s brand history and this is also where we are planning our future.”

Tricolor decorates the “110 ans Bugatti” in tribute to France

As you can see, the new Chiron Sport “110 ans Bugatti” bears one of the most famous symbols of a proud nation. The French tricolor “Le Bleu-Blanc-Rouge”, with its colors of blue, white and red, decorates the body and interiors at several points and harmonizes perfectly with the extraordinary Chiron Sport. The flag represents the French Revolution with its famous ideals of liberty (blue), equality (white) and fraternity (red). 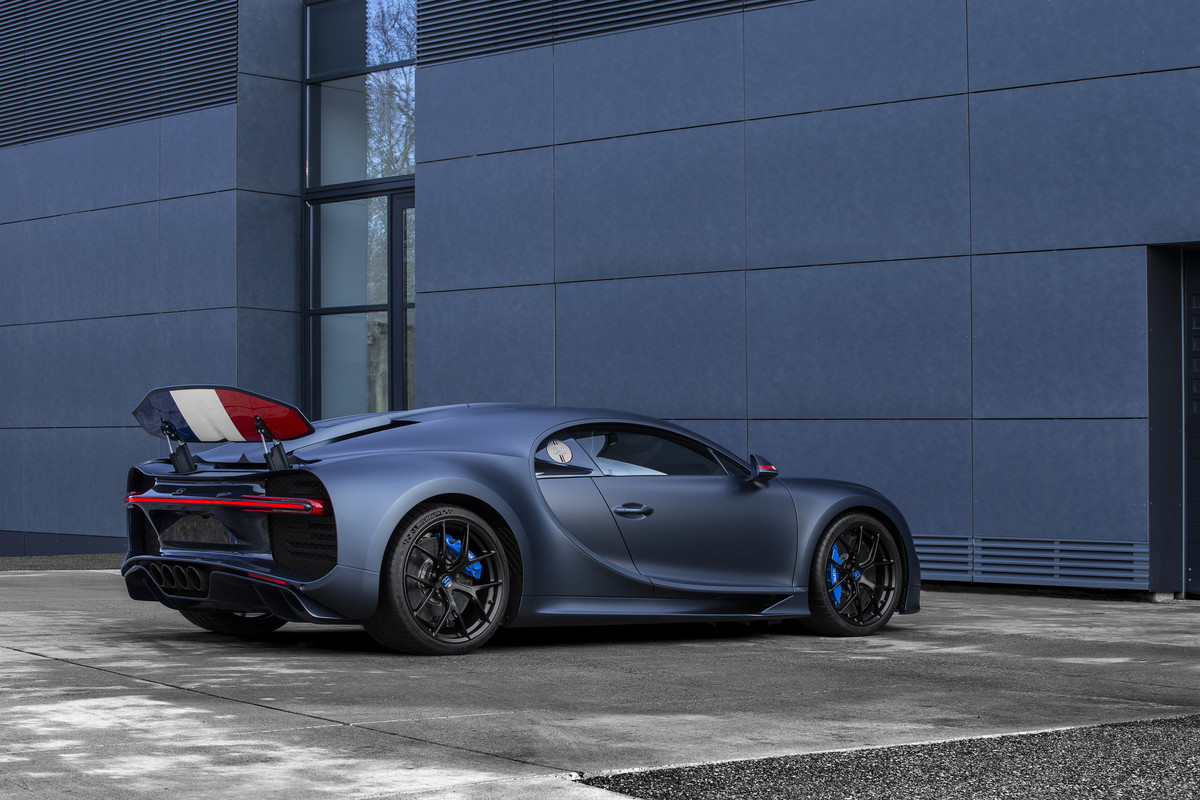 You may be surprised to see that the colors of the French flag are shown as a mirror image on the right-hand side of the vehicle, but this is also the arrangement adopted on French official vehicles, where the standard has the color of liberty (blue) to the fore on both sides.

The body and front end are made from carbon fiber, while the Bugatti line and Bugatti radiator are made from aluminium. The matte Steel Blue paintwork at the rear of the car, produced in a complex process, has a sheen like hot-rolled steel. The typical Bugatti line, the dominant “C” surrounding the passenger compartment, is also painted Steel Blue. The front end consists of exposed carbon fiber in Steel Blue Carbon, once again a matte color suggestive of steel.

The two-tone color scheme is reminiscent of historic models: in the 1920s, this type of paintwork was a sign of luxury and exclusiveness, while it now signals a sporting character and high technological competence. In the case of the Chiron “110 ans Bugatti”, the color scheme divides the bodywork into the monocoque and engine compartment. 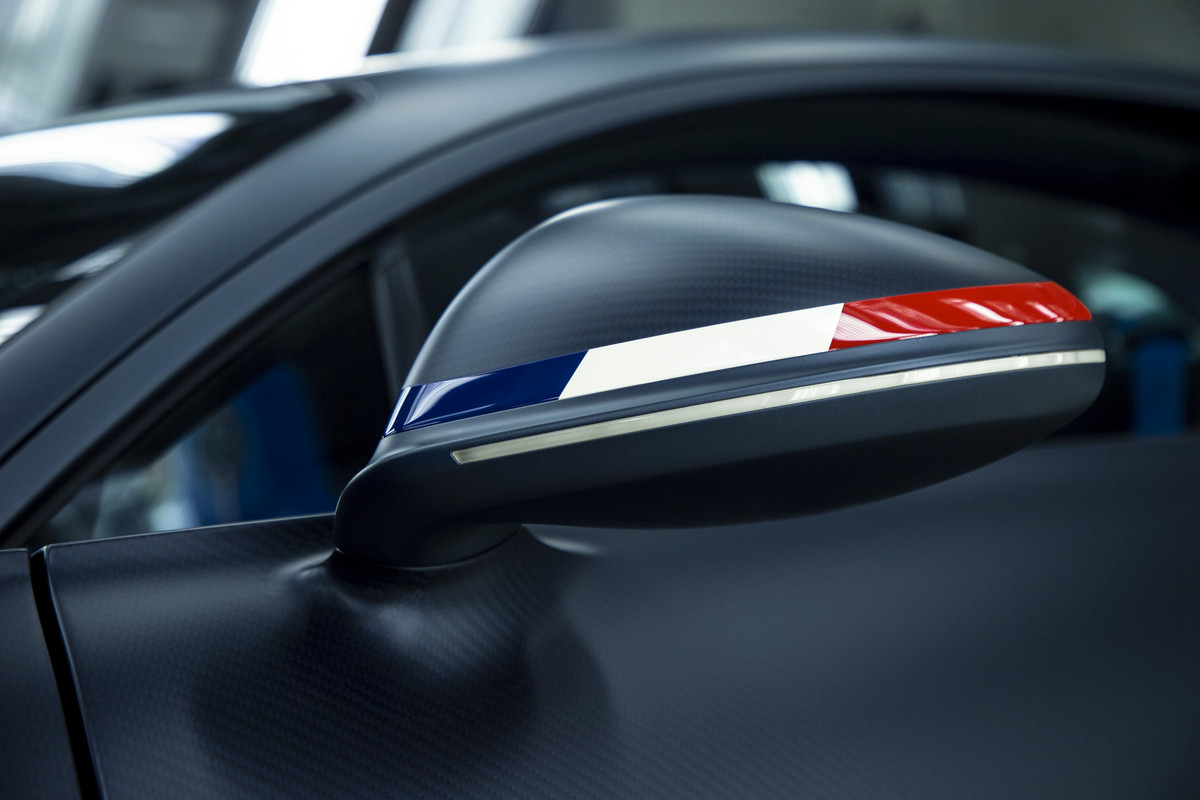 Behind the Nocturne matte black alloy wheels, the bright French Racing Blue brake calipers are visible. To obtain an immaculate finish, the aluminum filler cap is sandblasted and hand-polished. The “110 ans Bugatti” emblem, with the French flag running vertically through the logo, features at the center of the cap. If the customer so wishes, the base plate of the filler cap can also be painted blue or white.

The vehicle’s rear end is dominated by a diffuser and bumper in glossy Steel Blue Carbon with the contrasting matte black exhaust system. The underside of the rear spoiler has the French flag over its entire width. The rear spoiler mechanism is anodized in matte black to harmonize with the matte black Ettore Bugatti logo on the center of the rear, the matte black wheels and the matching sports exhaust system. The Sky View roof consisting of two fixed glass panels above the driver’s and passenger’s seats, available as an option on the Chiron, is a standard feature of the special edition. These panels have a newly developed laminated structure with thin glass and four intermediate layers. 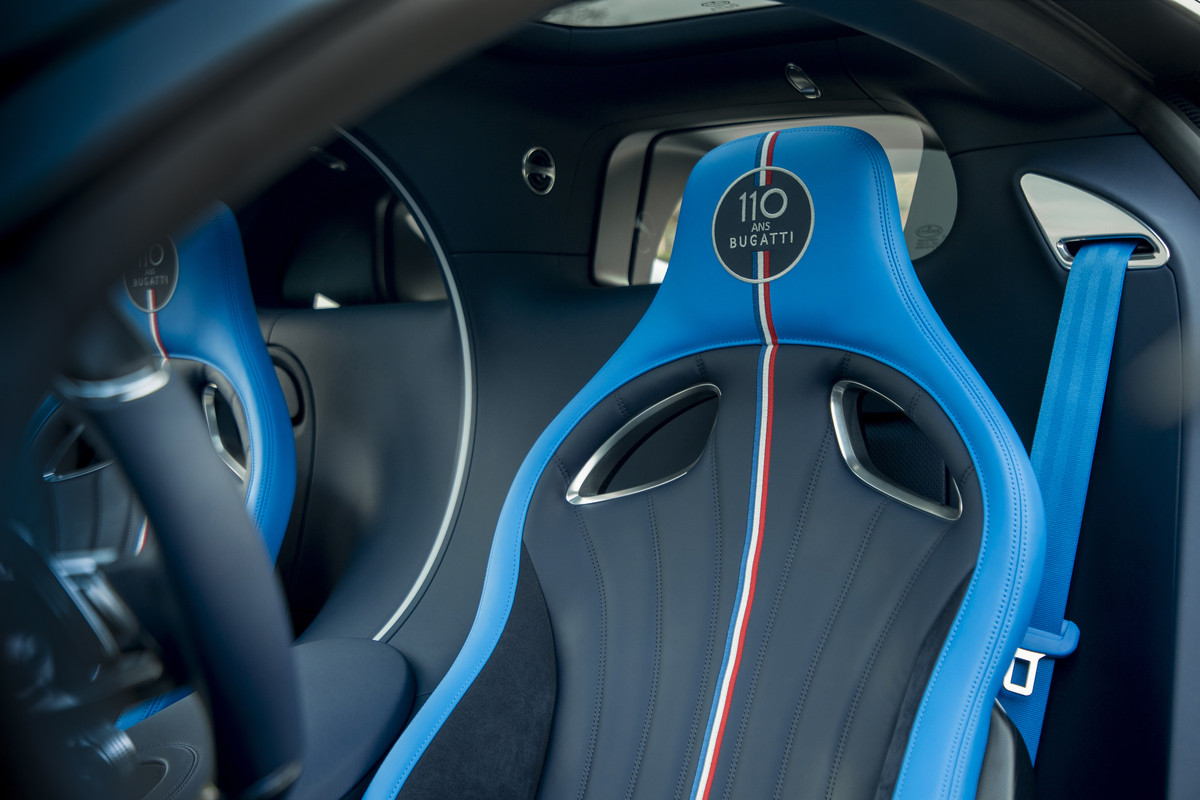 The French tricolor is also featured at several points in the interior of the “110 ans Bugatti” special edition. These include both headrests and back rests of the sports seats, decorated by high-quality embroidery with the French flag in a vertical position, and the 12 o’clock mark on the leather steering wheel. The sports steering wheel combines matte carbon fiber with a blue leather cover.

Carbon fiber is found on the nacelle, steering wheel, steering column and seat trims as well. The interior is upholstered in soft Deep Blue leather. The door trims, sides and seat areas of the sports seats are covered in Alcantara. Bright French Racing Blue elements on the contours of the seats, stowage compartments, belt trims and the leather of the window buttons provide a sporting contrast. The key of the “110 ans Bugatti” is surrounded by three sewn leather patches in the colors of the tricolor.

Another special feature that speaks to the high level of craftsmanship is a specially crafted medallion in the central console stowage space, made of solid silver with enamel inserts, positioned on a carbon fiber plate. 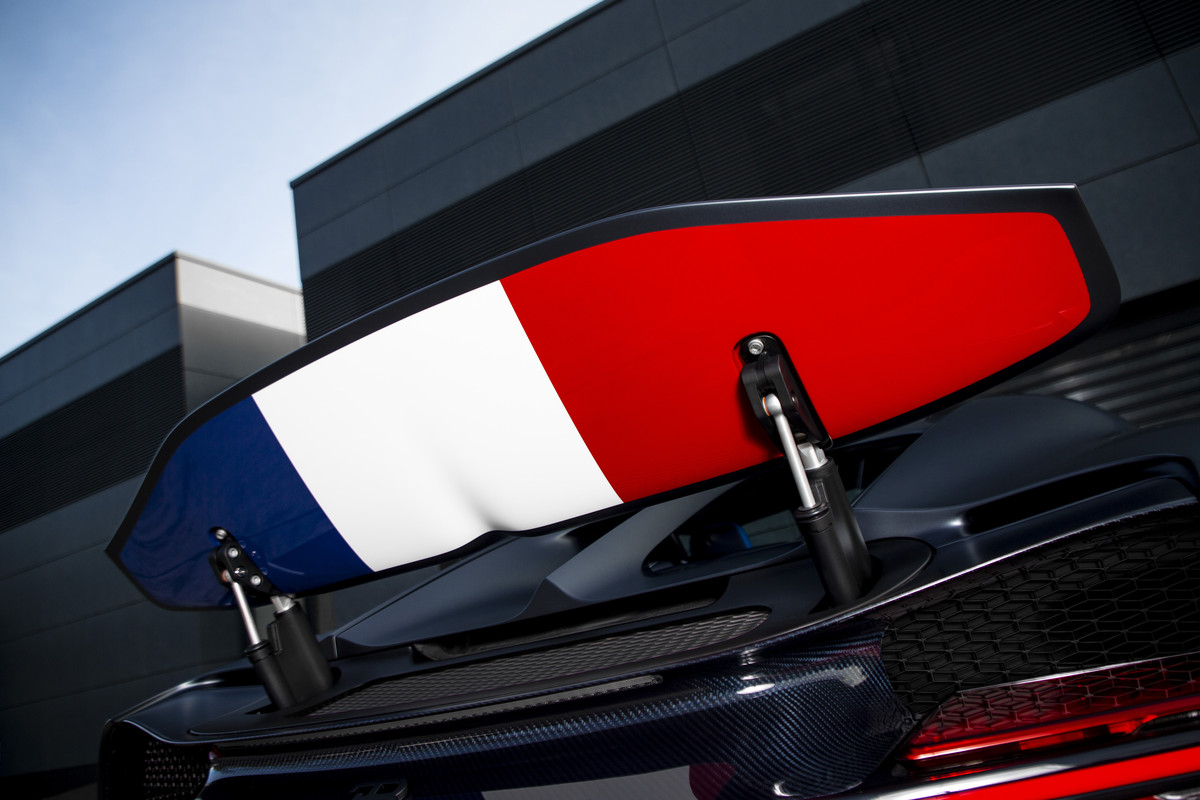 The “110 ans Bugatti” features a 8.0-liter W16 engine with four turbochargers that delivers an insane 1,500 horsepower and 1,180 lb-ft of torque. The engine compartment cover of the car is resplendent in Steel Blue and Steel Blue Carbon. The inserts on the cylinder banks are made from aluminum with a clear anodized finish. The car accelerates from 0 to 60 mph in less than 2.4 seconds, reaching 124 mph in 6.1 seconds and 186 mph in 13.1 seconds. Even the magic figure of 248 mph can be reached in only 32.6 seconds, on its way to a top speed of 260 mph.

While pricing hasn’t been announced, seeing as how a Chiron Sport starts at $3.3 million, and this extremely-limited model comes with the Sky View option and numerous bespoke options on top of that, it’s likely going to come in between $4-5 million.

So if you’ve got that kind of money burning a hole in your pocket and you really love France, this might be just the car for you! 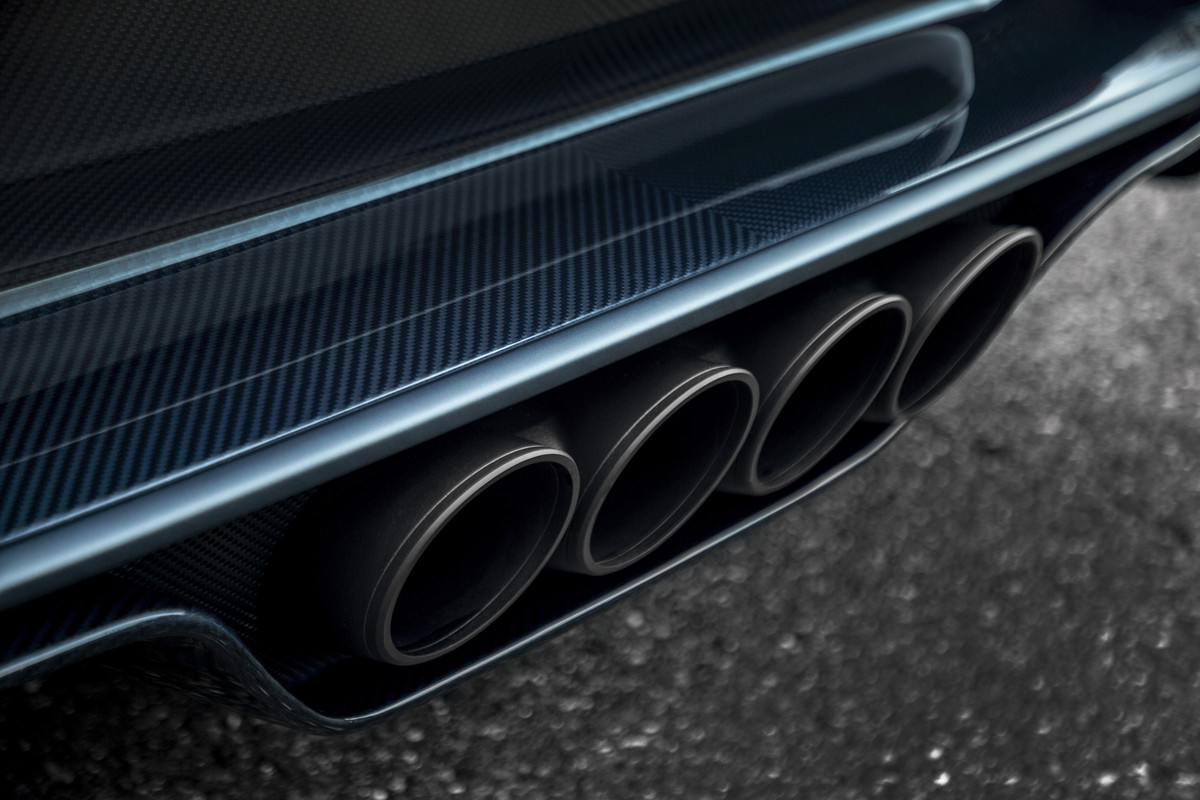 What do you think of the Bugatti Chiron Sport ‘110 ans Bugatti’?