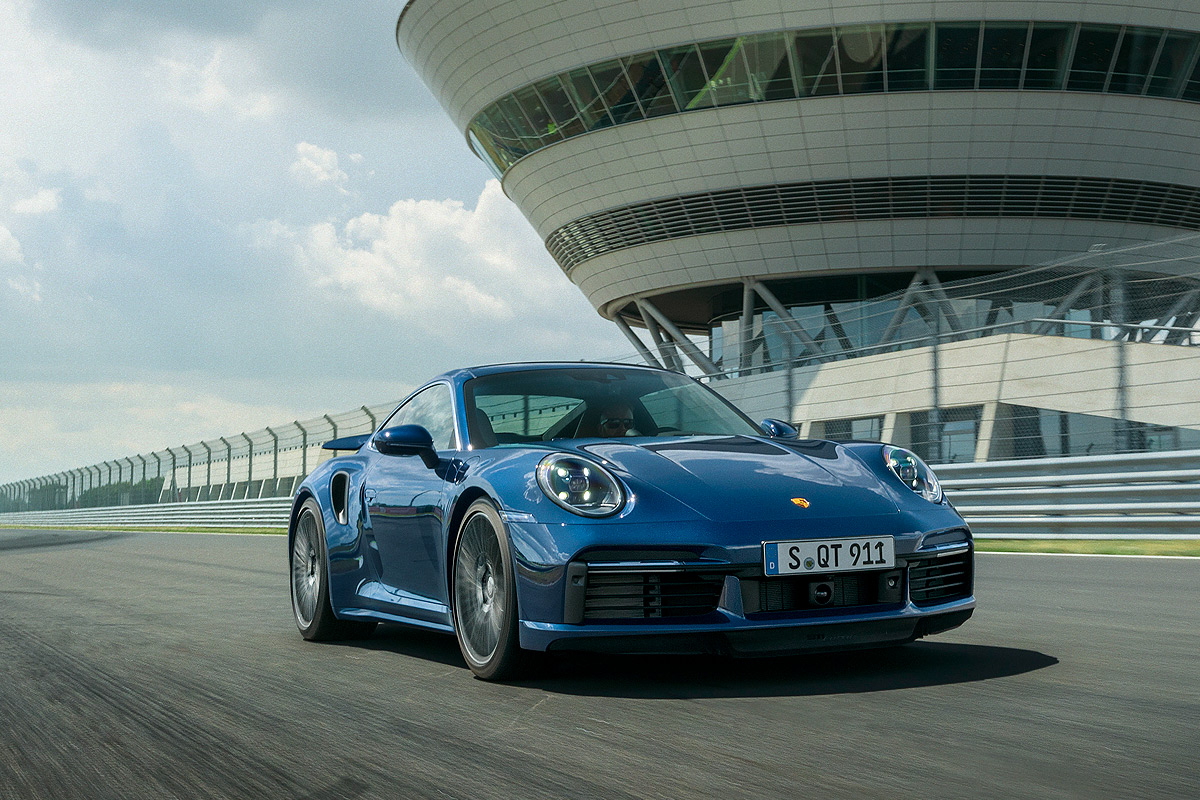 As if these past few weeks haven’t been crazy enough for automotive fans, now Porsche is jumping into the fray with the introduction of the new 2021 Porsche 911 Turbo, which offered in both coupe and cabriolet forms.

The new 2021 911 Turbo is powered by a 3.8-liter twin-turbo flat-six that puts out 572 horsepower and 553 lb-ft of torque, an increase of 32 hp and 67 lb-ft over the outgoing model. Porsche’s lightning-quick eight-speed dual-clutch PDK automatic transmission does all of the heavy lifting (sorry manual purists), rocketing from 0-60 in 2.7 seconds (2.8s for the cabriolet), and a top track speed of 198mph.

Yeah, that’s crazy fast. To put things in perspective, the acceleration, power output and torque of the new 2021 911 Turbo are on the level of the previous 2019 911 Turbo S. So we can only imagine what the next gen Turbo S will be putting out, as it should raise the bar even higher. 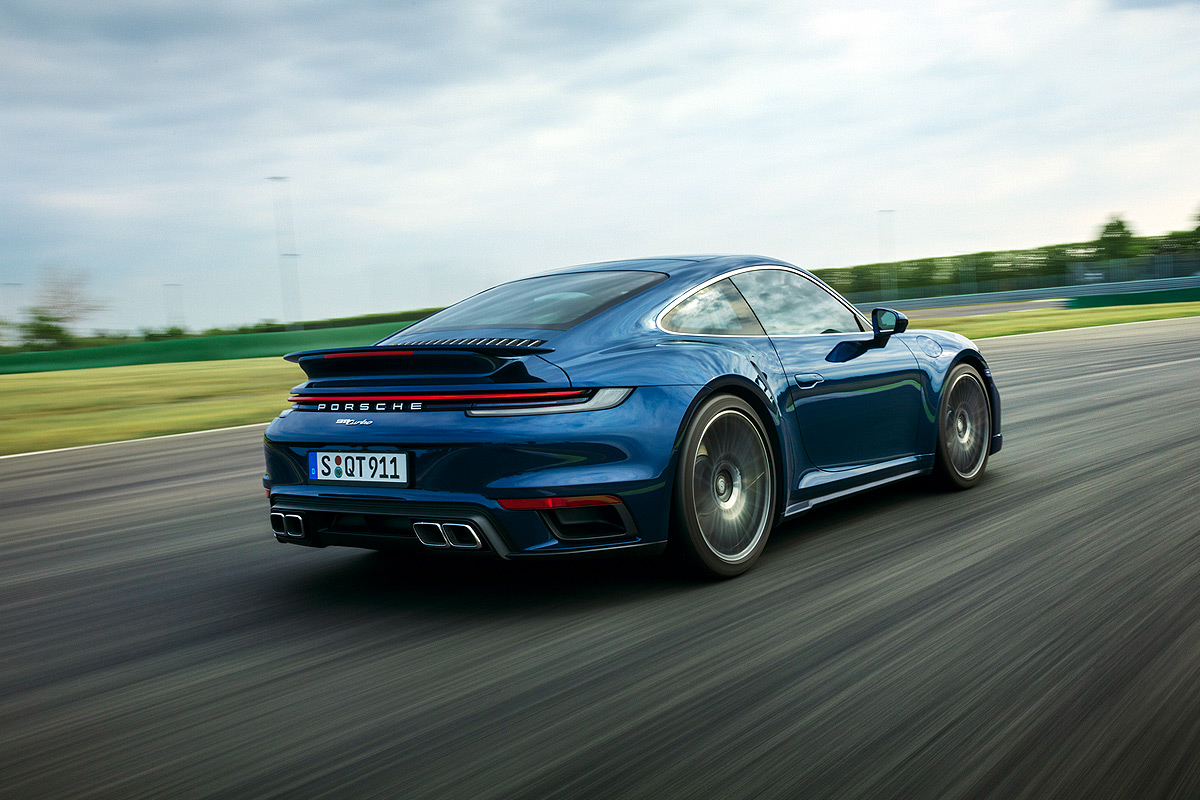 Complementing the increase in power, the 2021 Porsche 911 Turbo’s chassis has been tuned to offer an even greater level of performance. Adopting the changes implemented on the new 911 Turbo S earlier this year, steering response and precision on the new 911 Turbo models have been further improved thanks to an additional 1.65 inches of front track width and the new 20-inch 255/35 tires (up from 245/35 previously).

In addition, the Porsche Traction Management (PTM) active all-wheel drive system in the 911 Turbo is able to transfer even more power to the front wheels than before. Traction at the rear axle, which is equipped with rear-axle steering as standard, is increased even further by 0.39 inches of added track width compared to the last 911 Turbo, as well as 315/30 tires on 21-inch wheels (305/30 R 20 previously). 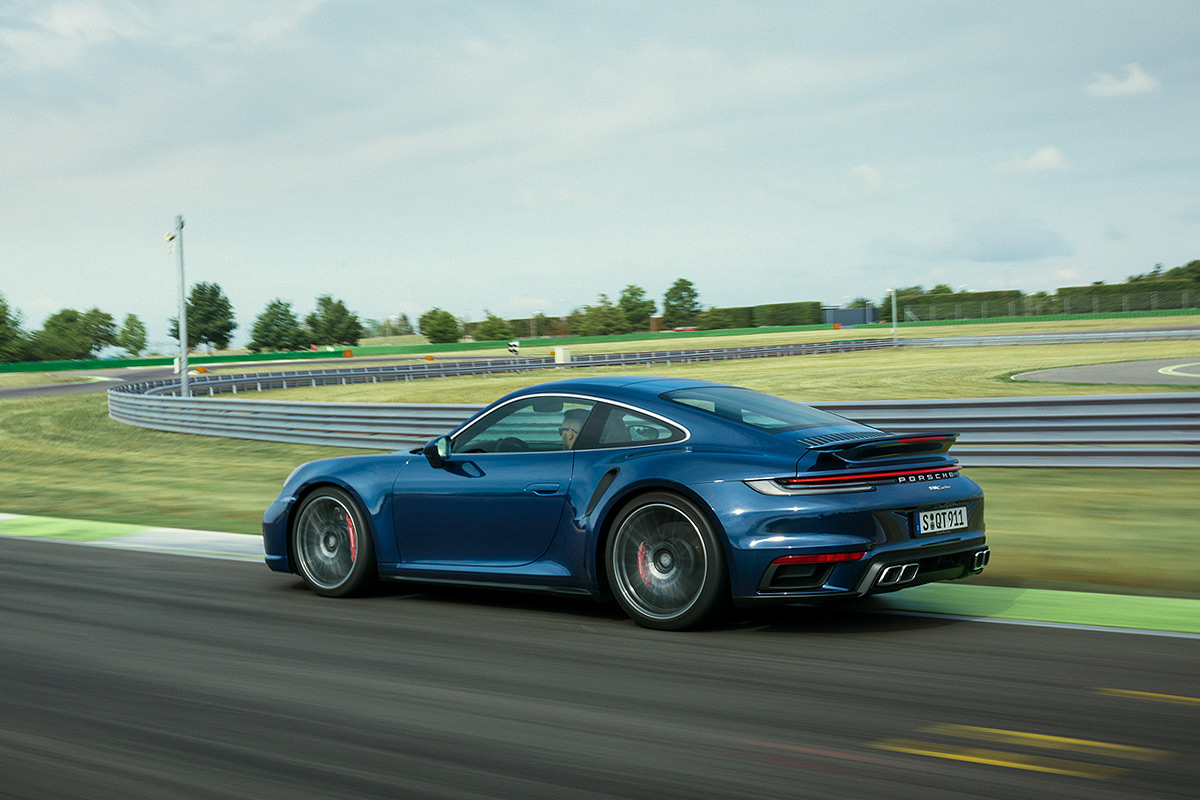 The revamped brake system is even larger than on the previous 911 Turbo and can be recognized by the red fixed calipers. The front cast iron brake rotors now measure 408 millimeters in diameter (28mm larger than the old 911 Turbo) and are 36 millimeters thick (2mm+). The rear axle features 380-millimeter brake rotors that are 30 millimeters thick. Porsche Ceramic Composite Brakes (PCCB), standard on the 911 Turbo S, with 10-piston front calipers, are available as an option.

Porsche’s Sport Exhaust system that was introduced on the 911 Turbo S is also optional for the 911 Turbo for the very first time. Two different suspension options are also new: while the standard PASM suspension offers a greater spread between agility and ride comfort than before, the particularly performance oriented, electronic controlled PASM Sport Suspension with a 0.39 inch (10 mm) lower ride height compared to the standard suspension benefits the agility of the new 911 Turbo even further with a set-up aimed at further enhancing driving dynamics. Porsche Dynamic Chassis Control (PDCC), which uses active anti-roll stabilization, is available as an option for the 911 Turbo models. 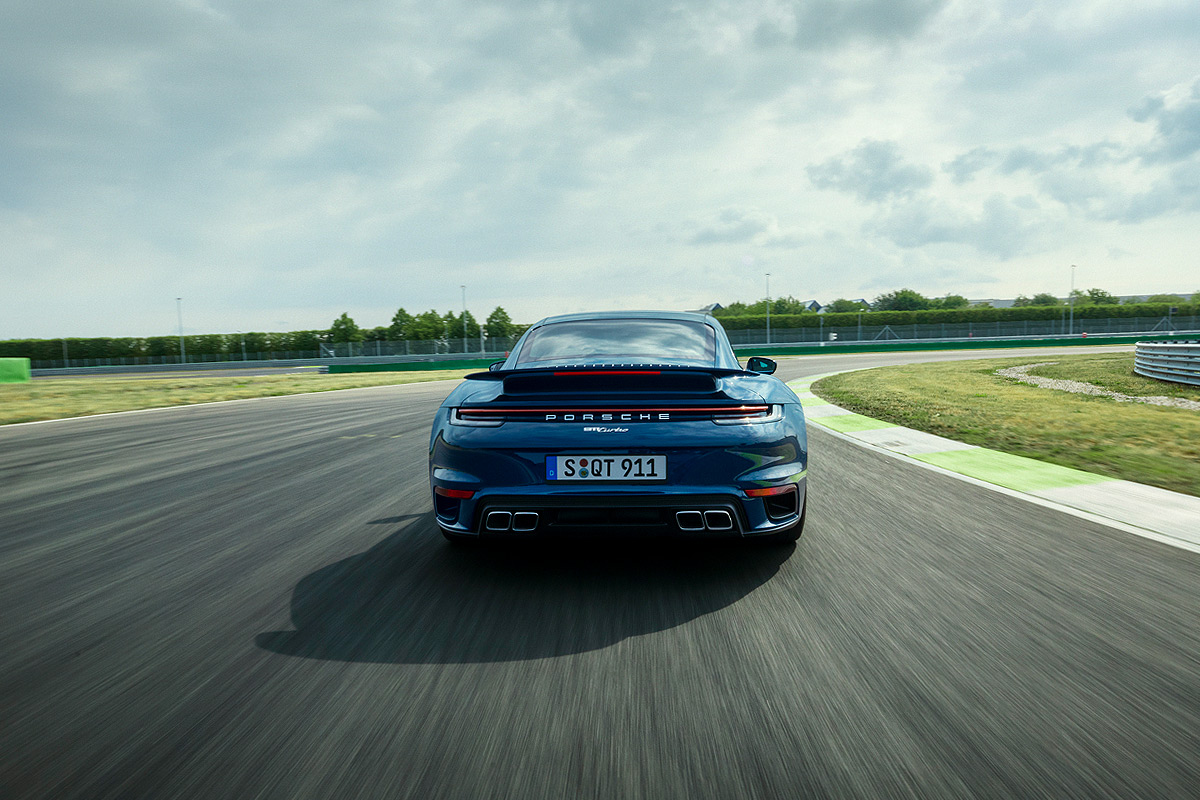 The muscular design of the 2021 911 Turbo reflects the increase in power & performance of the new 992-generation. Shared with the 2021 911 Turbo S, the body of the new 911 Turbo models is 1.8 inches wider than the predecessor at the front fenders to handle the increase in track width and tire size compared to the previous model. The new front luggage compartment lid featuring a striking recess in the center underlines the performance-focused character. LED headlights with PDLS Plus are fitted as standard.

At the rear axle, the body is now 0.78 inches wider than the previous 911 Turbo (991), also to accommodate wider track and tires. Other distinguishing features of the new 911 Turbo are the enhanced adaptive aerodynamics with controlled cooling air flaps at the front, a larger active front spoiler and the significantly increased size of the active rear spoiler. The air intakes on the rear side panels now draw in process air rather than cooling air. The charge air coolers are now positioned directly in the air stream under the rear decklid. The continuous light bar with LED tail lights as well as the new louvered rear decklid grille with silver trim strips round off the design of the rear end. 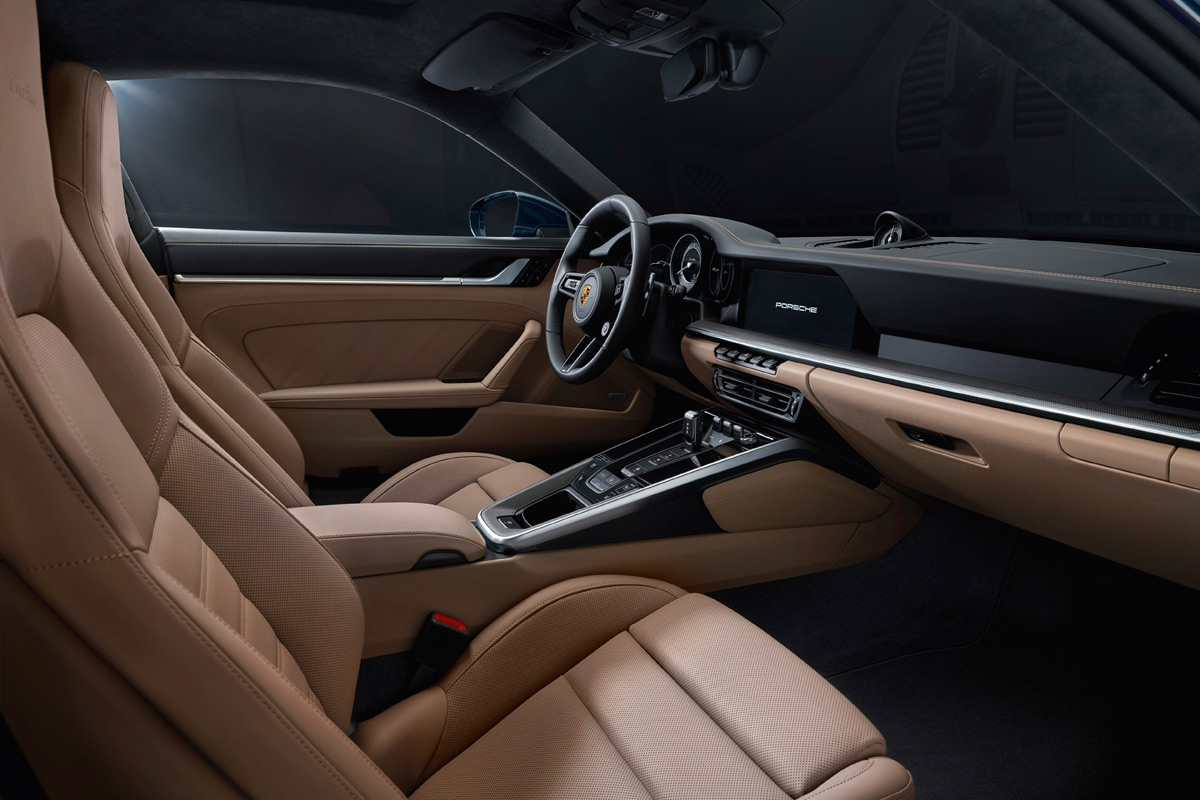 Want your Turbo to stand out even more? The appearance and performance-focused character of the vehicle can be additionally enhanced by the optional Lightweight package and Sport package. The Lightweight package for the coupe reduces the vehicle’s weight by about 66 lbs. Full Bucket seats, the deletion of the rear seats and reduced sound insulation contribute to the weight savings and allow that glorious exhaust note to enter the cabin more intensely. The Sport package encompasses all the elements of the SportDesign package as well as additional applications in Black, carbon fiber elements and Exclusive Design clear taillights. 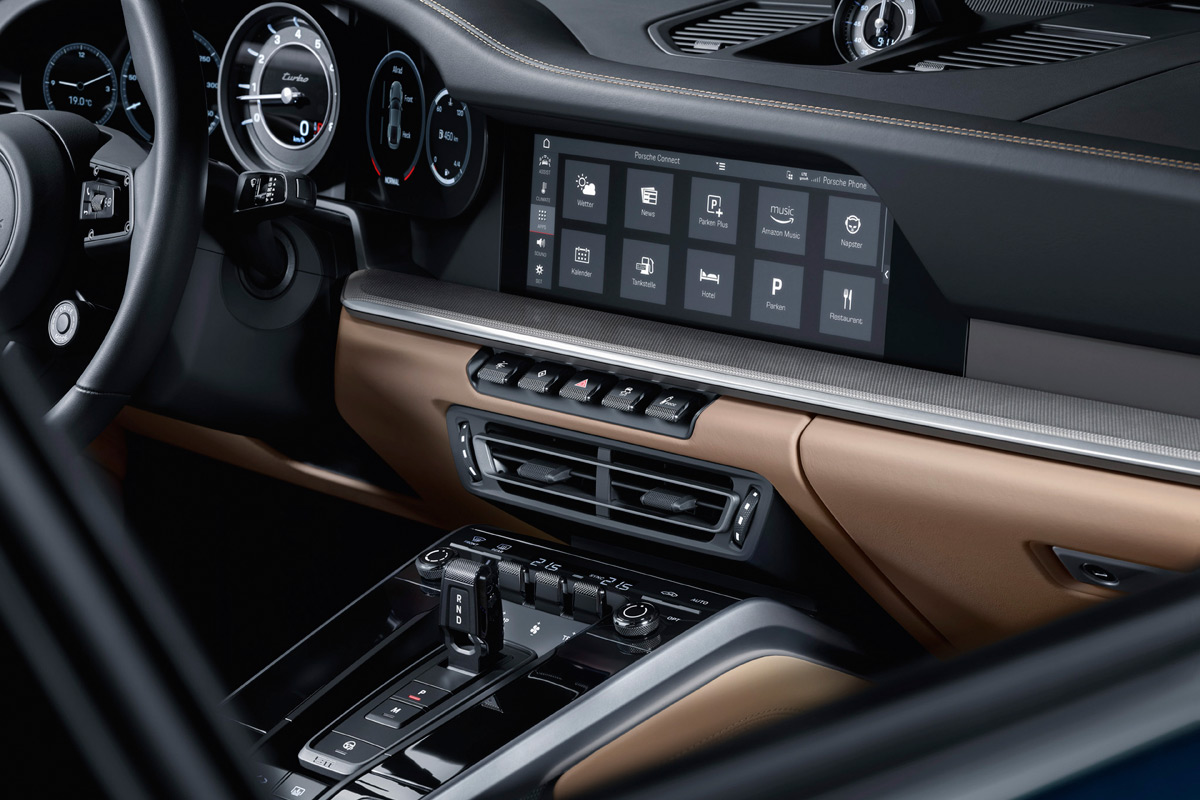 Dealers are taking orders now, with cars expected to reach the U.S. in early 2021. Those with heart conditions need not apply. 😀 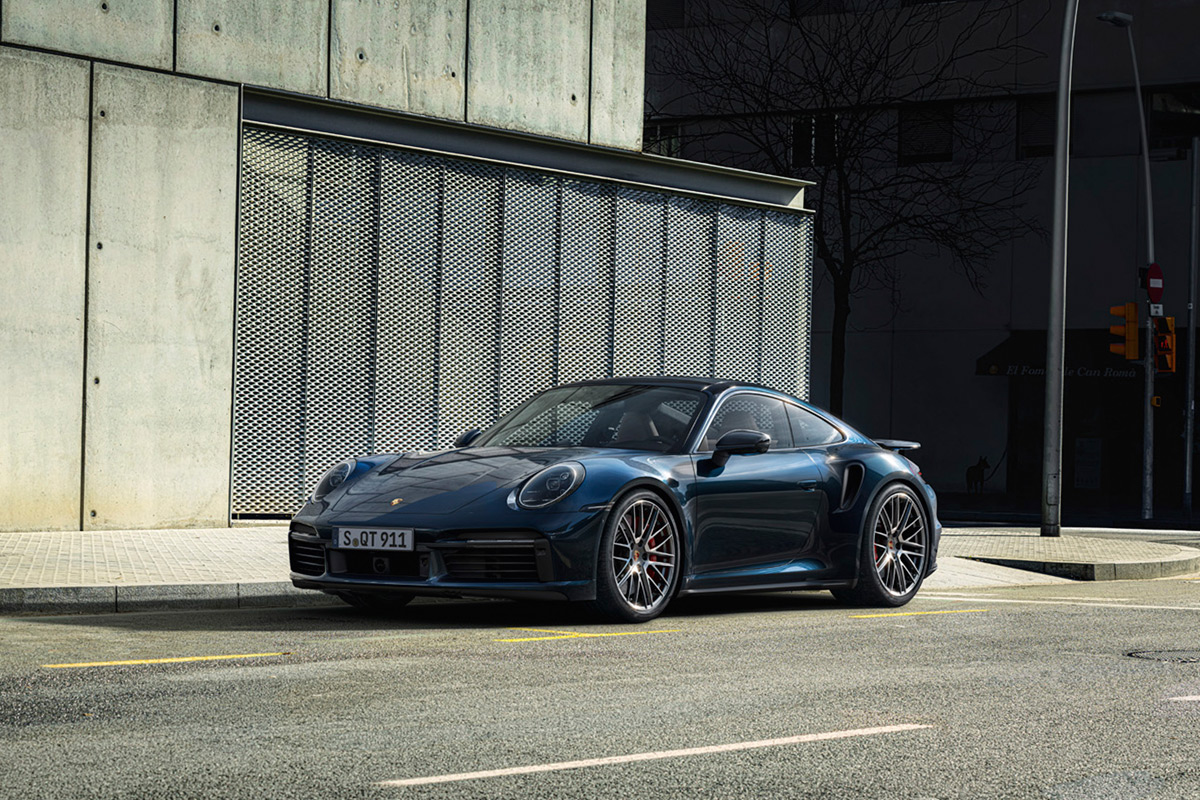